Five years ago today I got my very first piece of LED art gear to light up for the very first time.

It was a Color Kinetics panel that you sent data to over ethernet, not an addressable LED strip & embedded microcontroller coding situation at all. The panel itself previously belonged to an LED art pioneer, “Frostbyte”, who had taken it with him on his desert adventures before his untimely and accidental demise. His old electronic gear was auctioned for charity, and without really knowing what I was getting in to, I bought this massive (28 pound!) metal box with 144 RGB LEDs in it, and the network controller to match.

I could find no open source software to drive it, and owning the commercial sequencing/design package was out of my reach. For three years, the panel sat in my workroom idle and dark. But at some point, I found that the vendor had a simple free “test program” available, and I decided to see what I could do. Since the color data was sent from the test program to the panel over ethernet, I was able to capture the network packets, reverse engineer them, write my own code to talk directly to the LED panel, and TA-DA! First light!

But even with that one LED panel up and running, more than a year passed before I started learning how to use addressible LED strips and Arduino microcontrollers.  Another year after that, I had officially become ‘part of’ FastLED with Daniel Garcia.

And now?  Now I’ve created LED art myself, taken it on my adventures– desert and elsewhere, sold it and gifted it.  I’ve taught LED classes, and I’ve helped build an online community for thousands of FastLED users.  I’m not sure what I expected when I first bought that LED panel, but I don’t think it was all this great stuff.

So if there’s a lesson here, it might be this: If something intrigues you, step toward it.  You never know exactly where you’ll wind up, but the journey will be an adventure in the right direction.

When doing an LED electronics project, there seem to be three big “P”s that have to be tackled:
1. Pixels (which ones, how many, what configuration?),
2. Programming (what do I want, and how can I do that?), and
3. Power (how much, from where, and how do I distribute it?)

And people (by which I mean: perpetual newbies like me) tend to do them in that order: first wire up some pixels, then program them, then figure out how to power it all for real.

And of course, this often leads to a problem where you get stuck between steps 2 and 3, where you have your creation sort of up and running on the lab bench — but now there’s this little problem of how to power it, and you have to go back and rethink and rework other parts of the project to accommodate the power situation.  So it’s worth planning for power from the start — which is easy to say, but hard to do!

So what happens if you don’t plan for power? Well, here are some power problems that I have personally had. How many of these can you diagnose just from the description?  (“Failure to plan” is a nice catch-all phrase here if you get stuck.)

So: Plan For Power.

Use on-line calculators that will help you figure out how much power you’re going to need, and what gauge wire you’ll have to use given how long your cable runs are going to be.  I also really like the “LEDstimator” app for iOS to help explore some “what-if” values for things like wire gauge.  https://itunes.apple.com/us/app/ledstimator/id945794010?mt=8

And above all else… uh… wait… do you smell something burning?

FastLED for the Apple II: Hack to the Future!

These days, I hack LEDs.  I’m the co-author (with Daniel Garcia) of the FastLED library for driving tons of high speed LED pixels and strips using microcontrollers like Arduino and Teensy.

But back in the day, I hacked a lot of Apple II.  I published a couple of shoot-em-up games (with Geoffrey Engelstein), all written in lovingly hand-crafted 6502 assembly language.

Finally I decided it was time to link the present to the past: to connect a hundred high-speed RGB LEDs to an Apple II, somehow, and ‘port’ our FastLED library to 6502 assembly language.

I gave the code its public debut at Veracode Hackathon 7.  (The theme was “Cozy Cabin” — I don’t usually wear plaid.)

So how does this all work? Well, you connect the CLOCK and DATA_IN pins from the LED strip to a couple of pins on your Apple II’s DIP game connector port, add power, and you’re ready to go.  The Apple II’s game connector not only has inputs for joysticks, paddles, buttons, and so on, but it also has a few digital outputs — and that’s what FastLED6502 uses to deliver signals to the LED strip.  On all the 16-pin DIP Apple II game ports (except for the //gs!), there’s even one pin that delivers a super-fast digital pulse; pin 5 is the C040STROBE line, which can pulse twice as fast as the other digital outputs.  If you choose that for your CLOCK pin, the FastLED6502 code automatically shifts into high gear, and you get faster performance.   FastLED proper does this, too, in a much fancier way; it’s amusing that ‘little’ FastLED6502 does some of this, too.

Overall, this bit of code is completely nuts, and we don’t expect anyone to use it.  At all.  Ever.  Accordingly, we’re not going to really support it, either.  At all.  Ever.  It was a labor of love and a creation of pure modern retrocomputing insanity.  But here it is, in all it’s insane glory, “FastLED6502”.
And now, if you cut me, I’ll bleed 16,777,216 colors at thirty frames a second. 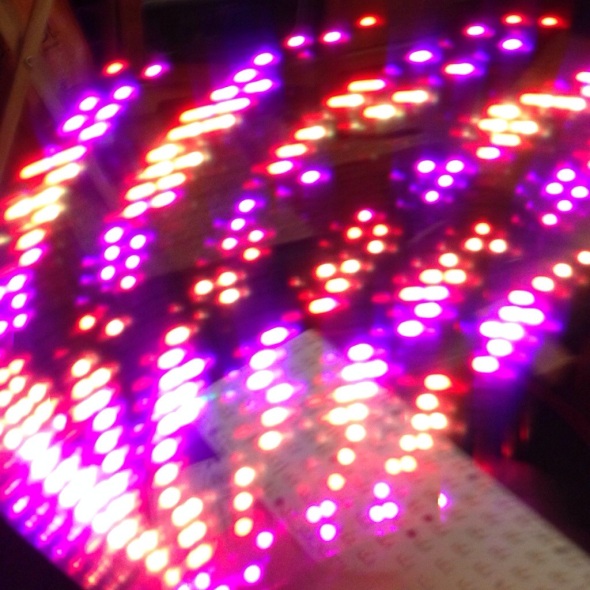 Running 2 Amps of LEDs through an Arduino Nano

The Arduino Nano provides up to 0.5 Amps of regulated +5v output, on it’s “+5V” pin, which can drive between 10-30 addressable LEDs, depending on your chosen brightness and animation patterns.  Even if you connect a 2 Amp USB power supply (e.g. an iPad charger), the Nano’s little voltage regulator will overheat if you try to draw more than 0.5 Amps from the “+5V” pin on the Arduino.

However, you can ‘tap’ the pre-voltage-regulator power traces on the Nano’s circuit board, and drive 2 Amps of LEDs (over 100) ‘through’ the Nano, and do it in a way that keeps your wiring simple.  Basically, you can find the places on the Nano’s board where the raw USB power connections are exposed, and tap into them there.

WARNING!
MODIFY, MISUSE, AND DESTROY YOUR ARDUINO AT YOUR OWN RISK!
DANGER! FIRE! RUN!

But, OK, if you wish to continue…

1. Flip the Nano over so you’re looking at the bottom side.

2. The unfiltered, unregulated +5 signal from the USB port is available on the board near the base of the D2 pin.  Carefully solder a wire (red, for +5v) directly to the exposed component pin on the circuit board.

3. A convenient companion GND connection can found on the center pin of the power regulator itself.  Solder a wire (black, for ground) to this pin.

4. By powering your LEDs from these direct-power traces (and thus directly from the USB power source), instead of through the Nano’s half-amp-max voltage regulator, you can drive up to about two Amps worth of LEDs, provided that you plug the Nano into a 2 Amp USB power adapter.

I’ve used this technique in probably six or eight Arduino Nano projects, and nothing’s caught fire (yet).  With a little probing around, you can also find similar ‘hacks’ for other models of Arduino, e.g., the Uno, Leonardo, etc., but since power is handled differently on each board, you’ll have to figure it out differently for each board design.