We love doing Easter egg hunts.  But as the girls get faster, smarter, and more wily, merely finding the eggs is no longer challenge enough.  I’ve gotta slow ’em down somehow, and this is how I do it: each girl gets an empty basket (I use traditional Jack-O-Lantern baskets), and sheet of instructions helping her know which eggs are for her, and which are for her step-sister.  Each year, the instructions require more careful reading and invoke increasingly complicated rules.

New this year: the contents of two of the eggs altered the interpretation of rules, retroactively. This fact itself was part of the published rules… this time.

The best part was watching the girls excitedly pounce as they found the first eggs, and then stall completely as they had to stop and puzzle out exactly who’s egg it actually was that they’d just found. 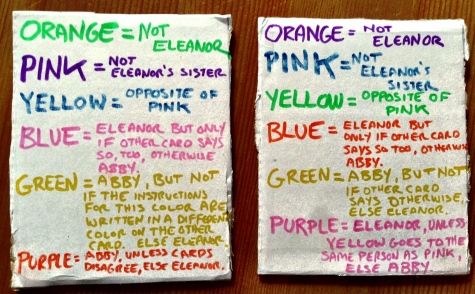