The rules were simple: each girl would be assigned a couple of colors, and each girl could pick up any egg she found once she was certain that the egg matched one of her colors.  Easy, right?  Further ‘simplifying’ things, I announced that I had placed one giant colored egg on a pedestal with each girl’s name (and one for the parents), so all they had to do was look at the pedestal with their name, and they’d see their first egg color.  I showed them all a picture (below) of how nicely I had set it up, and how easy it was going to be. 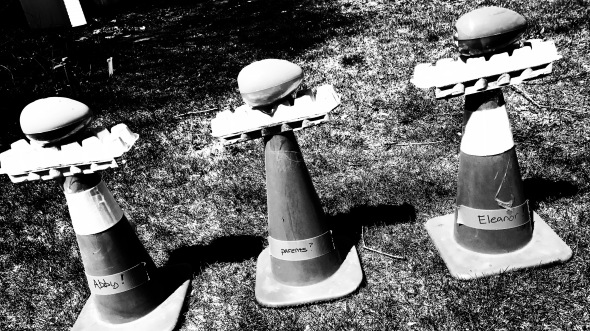 But when we got outside to start collecting eggs… quelle surprise! The wind seemed to have blown the eggs off their pedestals!  How ever would the girls know which color was theirs??

Luckily, each pedestal contained a set of instructions for figuring things out in case of just such an emergency:

The girls retreated to the kitchen to pencil-and-paper this problem.  After a few minutes, they’d worked it out with Rebecca offering supportive coaching (but not giving away the answers even though she’s great at these puzzles).  The girls hastened outside to each crack open their correct-color giant eggs.

Inside each giant egg was a message… and another, smaller egg.

Inside the smaller eggs was some chocolate, which was immediate consumed as much-needed brain fuel.  And there were also some scraps of cut up paper with writing across them — clearly they needed to be reassembled.  The girls hurried back inside, and taped the paper back together, revealing four trivia questions about opening magical doors.  (Full credit here: Three of these riddles were written by Ryan O’Boyle for Veracode Hackathon 10 & 5/7ths.  His riddles were great, and inspired me to add one additional one of my own.) 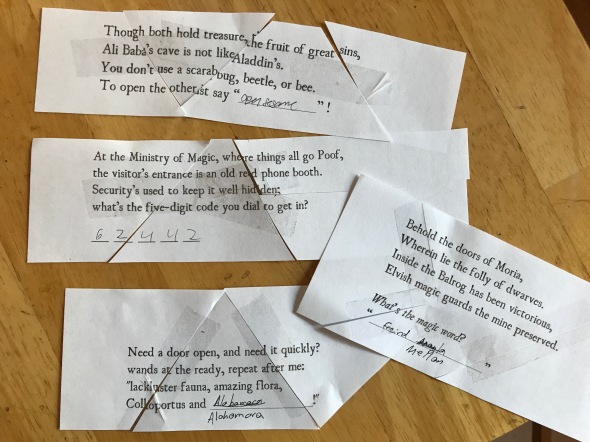 It just so happened that the team included a Tolkien expert (Norm), and several Harry Potter fans (everyone but me) so the answers were quickly found.  Bonus points to Abby for remember the spell “Alohomora”, and to Eleanor for remembering that the Ministry of Magic’s phone booth code was “M A G I C” on the telephone dial — and then using the Phone app on her iPhone to look up what numbers that was.

But now what?  The girls still needed to know what colors of eggs they each were looking for, and all they had were these trivia answers — definitely not colors.  Well luckily the third giant egg, the one for the parents, contained a “Helpful, Quick, and Easy Egg Color Key!” with some hand-wavey formula clues on it about how to transform the trivia question answers into numbers. 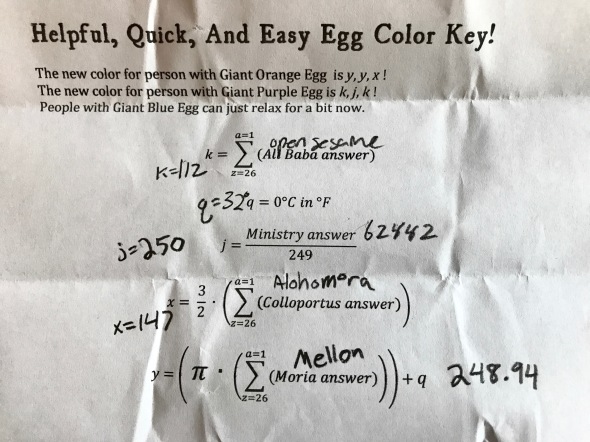 By considering a=1, b=2, etc., and adding up the letters in each trivial answer (and after I fixed a typo..oops), the girls arrived at numeric values… but still no colors.  It was more or less at this point that Eleanor started invoking the word “patricide” in her running commentary. 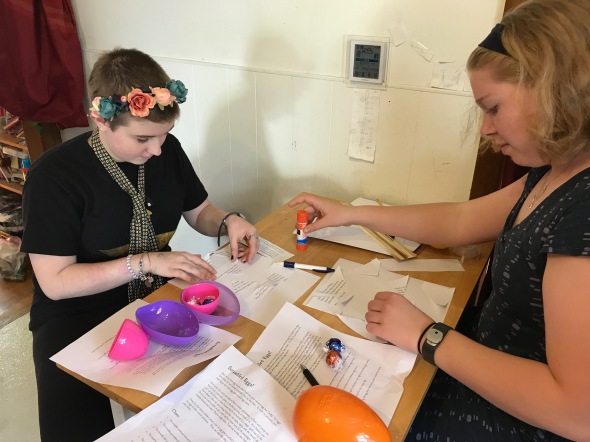 Working through the formulas provided on the key, the girls had figured out that the variables k=112, j=250, x=147, and y=248, so, again, they had some numbers, but no colors. The key said that one color was y,y,x and the other color was k,j,k.

“But how are those colors?”, Rebecca asked, and there was a moment of silence. 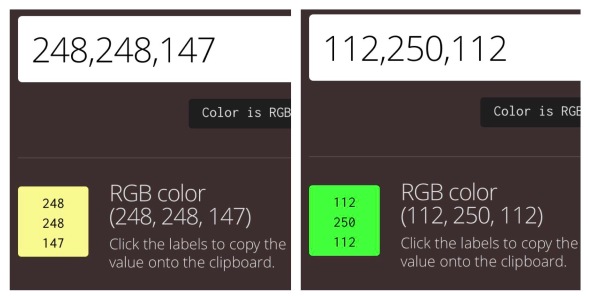 Now with each of the girls knowing exactly which egg colors were theirs, they scooted out to the yard.  Within just a few minutes, they’d found all of the (poorly) hidden eggs, collected them, and returned to the kitchen inside to savor the chocolate goodies within.

Then came the screams.

Then came the screams.  For inside each egg not only was there a tasty bit of chocolate, but also… more sliced up message fragments.  There was clearly another part of the puzzle. Madly, the girls sorted out all the pieces and assembled them: 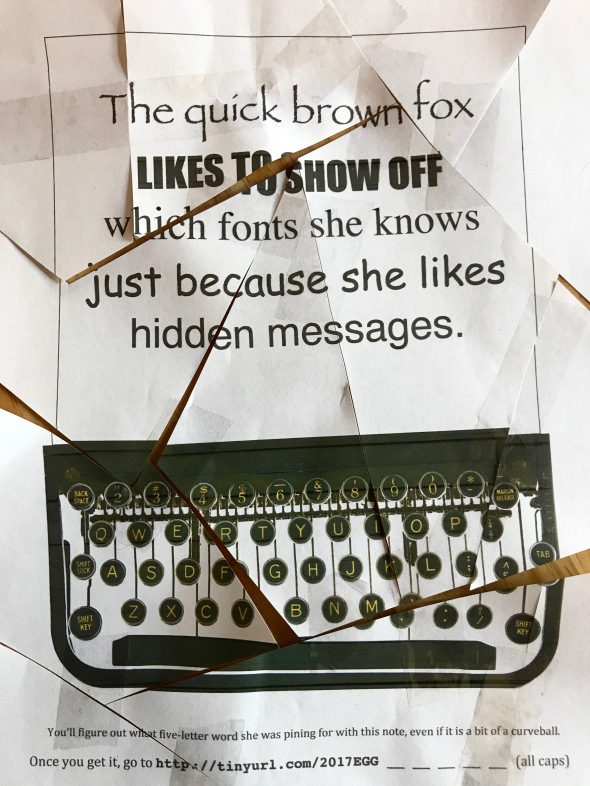 The team stared at this for a while, and then started discussing the fonts: Papyrus, then a font that no one knew the name of, then Times, Comic Sans, and Helvetica (with a quick argument about Arial… ending with “Well, young lady, in this house, we use Helvetica!”).  Could the five-letter word that the clue was asking for be made from the initials of the fonts?  P_TCH? PATCH was considered for a minute, but when the girls hit on PITCH, the hints about “pining”, “note”, and “curveball” all clicked!

Using PITCH, they completed the partial URL and typed in http://tinyurl.com/2017EGGPITCH  What came up at that URL was a photograph of the front of the house, with a big green arrow. 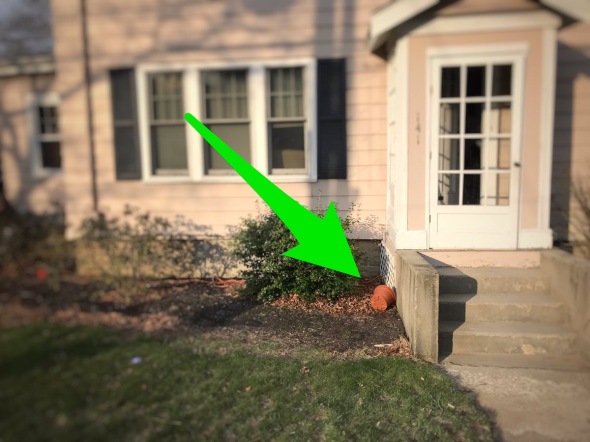 The girls practically flew out the front door, flipped over the flowerpot in the picture, and were rewarded with a glass jar filled with glittery treasure eggs, yet more chocolate, and a note saying VICTORY!  CONGRATULATIONS on SOLVING the 2017 Easter Egg Hunt!

Happy congratulations were shared all around, and everyone enjoyed some of their hard-won chocolate.

With the puzzles finally solved, and chocolate fully secured, Eleanor finally stopped repeating the word “patricide” over and over, which she’d started saying nearly an hour before. 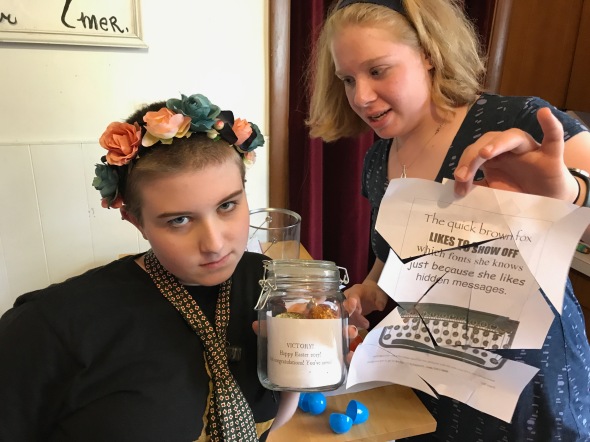 For the record, the total elapsed time was 56 minutes, 42 seconds — including the time it took for me to fix the typo in the math key (oops), and the time that Eleanor spent repeating the word “patricide”.