Giving the Gift of Receiving

When you’re a little kid, the proverb “It is better to give than to receive” sounds like nonsense grown-up talk; most little kids would rather get a toy than give one away.  But here’s a story about giving and receiving that shows what the proverb is really trying to express.

In 2010, I went to Burning Man with a bunch of friends.  My friend Debby and I were walking around the city there, checking out all the art projects, and Saturday afternoon, after we’d all been living in the desert for a week, we came across a Wishing Well. 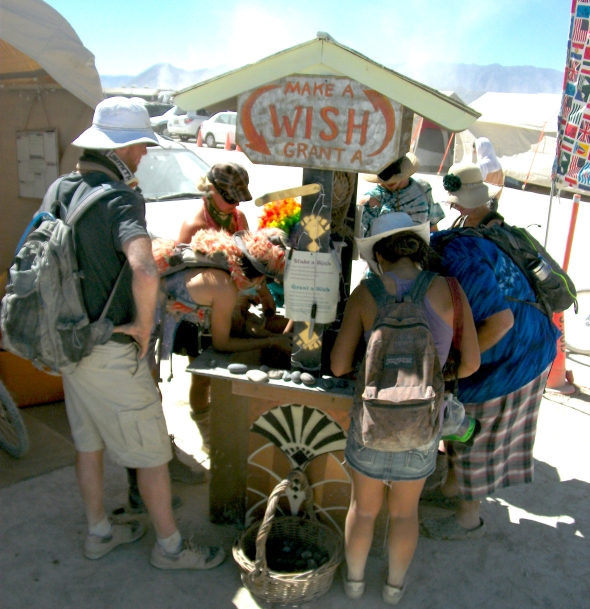 Here’s how the Wishing Well worked: you could make a wish, or you could grant a wish.  To make a wish, write your wish on a rock (provided), along with your name and where you were camping.  To grant a wish, rummage around through the stones that other people had written their wishes on, and see if there are any wishes you can grant.  If so, take the stone with you, go find the person who wished on it, and make their wish come true.

I decided to make a wish.  I wrote on a stone that I wished for a trinket to bring home to my daughter.  I added my name, camp location, and tossed it in the Wishing Well.

While I was doing this, my friend Debby was rummaging around in the wishes that other people had tossed in the well.  She held up a few stones that said all sorts of predictable things, and then held up a stone that said that “Dave” at such-and-such a camp was wishing for “fresh pineapple”.  The entire population of the city had been camping in the desert for a week, and fresh fruit was an exotic wish indeed.  But then Debby said, “I’ve got one.”

“You’ve got one what?  A pineapple?”, I asked laughingly.

“Yes.  A whole fresh pineapple.  I have one.  It’s been packed in ice all week, in a cooler, back at our camp.”

I was incredulous.  “What were you going to do with your pineapple? Do you have a plan for it??” 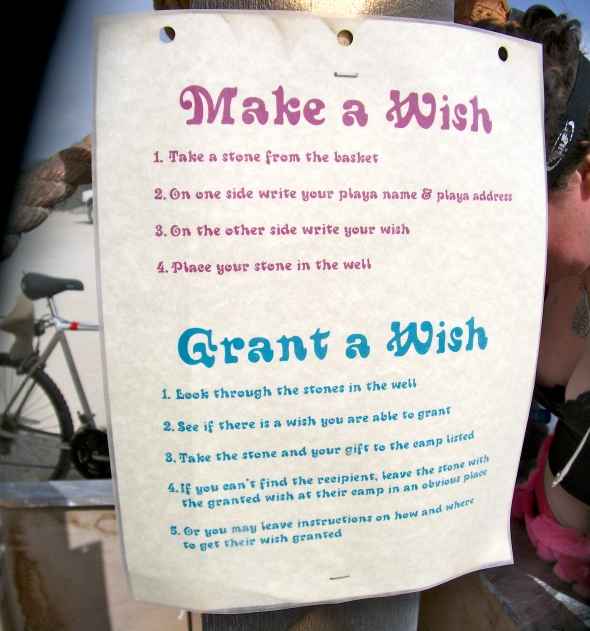 So we took Dave’s wishing stone, went back to our camp, dug the whole, entire fresh pineapple out from the cooler, and set off to find Dave.  Black Rock City (Burning Man) is never really entirely organized. In 2010, the population was over 50,000 people, and even though we had an approximate address of where to find ‘Dave’, Debby and I had to wander around quite a bit, and ask a lot of people for directions and clues before we triangulated on Dave’s camp.

When we found the right camp, we started asking “Does anyone here know Dave?  Is Dave here?”  After a few minutes, Dave poked his head out of a tent and said “Who are you?  Why are you looking for me?”

We said, “We’re here from the Wishing Well.  Are you the person who wished for fresh pineapple?”

“Yes?  Yes…” he said starting to choke up, disbelieving, and getting emotional.  “Yes, I did wish for that, but I thought it was impossible… oh my god…”

We handed the fresh pineapple, still cool from the ice, to Dave, who took it.  He stared at it as if it weren’t real, as if none of this was really even happening.  He broke out in tears of joy, hugging first the pineapple, then us, then the pineapple again.  Debby and I told him to enjoy it, and we went on our way, grinning and laughing.

The next day, someone I didn’t know stopped by our camp, asking “Is Mark here? Does anyone know Mark?”  I said “I’m Mark”, and they handed me a little hand-made necklace with the Burning Man logo on it, and said “This is for you to bring home to your daughter; I found your wish in the wishing well.  I made this necklace, and I want you to bring it to her!”  I gave a big smile and a big thank you, and a hug, and tucked the necklace away somewhere safe for my trip home.

Later, I was reflecting on these two experiences: receiving the thing that I had wished for, and giving someone else what they had wished for.   It was exceedingly clear to me which had been more rewarding to me. While I did like receiving the necklace to bring home, granting Dave’s wish for pineapple had made me feel absolutely wonderful inside, and that feeling still stays with me today.  So, I thought, I guess it really is better to give than to receive.

The more I thought about it, the more I came to realize that the real gift had been the one that Dave gave to me and Debby: by asking for something, Dave had given us the chance to give it to him, and then to feel wonderful about it.  It’s the same gift that I gave the necklace artist by asking for a trinket to take home: a chance to do something nice for someone and feel wonderful about it.

I think about this story when people offer “Is there anything I can do to help? Is there anything I can bring you?”  My first impulse is often to say “No thank you, I’m all set”, because I don’t want to impose on them. But then I think that maybe a better answer is to say “Why yes, actually, there is one small thing that would be nice…”, because then I am giving them the gift of being able to do something nice for someone, and to feel good about it.  It’s “giving the gift of receiving”.

Sometimes, by asking for something, we can make other people happier, and that seems worth doing.  Someone’s got to toss their wishes into the well, so other people can grant them. 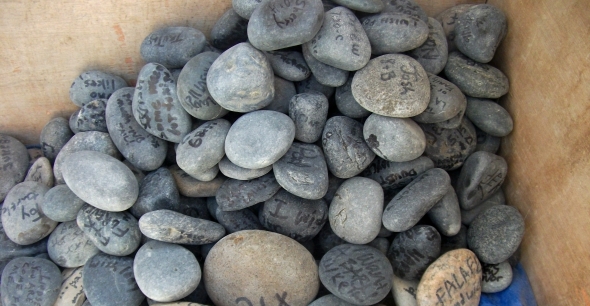