Bear with me here, because about 200 words from now I’m going to make a huge brag that I hardly ever talk about these days. OK, thanks. Let’s go:

Clearway Technologies, a company that I founded, shared an award for “Fastest Growing New Market: CDNs”.  C.D.N. stands for “Content Delivery Network”, a system of helping deliver web pages, images, and videos faster over the Internet; the CDN that some people may be familiar with today in 2016 is Akamai, but back in the 2000’s, there were half a dozen CDN companies, all trying to get a slice of the CDN revenue pie.

On pages 42-43, Clearway, SolidSpeed, Speedera, EpicRealm, and Akamai were all called out for awards #5, 6, 7, 8, and 9, in the overall CDN area, and for developing this hot new marketplace.

And then, later on in the list of awards, we come to #68, given exclusively to Clearway, and to me, “For Inventing CDN”.

And you know what?  They’ve got the facts right here.  By the time Akamai was just barely getting started, I already had Clearway Technologies up and running, and we were already shipping our first CDN offering, and I’d already filed for the patent on our core technologies.

So while I’m a little too modest to be comfortable saying it, as far as I can tell, it’s true:
I invented the first CDN.

Now, while I do get to say that I invented the first CDN, “FireSite” and “FireSite.net”, I also have to say that I didn’t get rich from it.  Clearway was initially a ‘bootstrap’ startup, and so grew very slowly at first. Here’s the entire company, in August 1996 doing our initial product launch at Macworld in Boston.

Later, we took in venture capital, and we grew Clearway to over 200 people.  Here’s the team that helped do our ‘big’ launch at Networld/Interop 2000 in Atlanta. 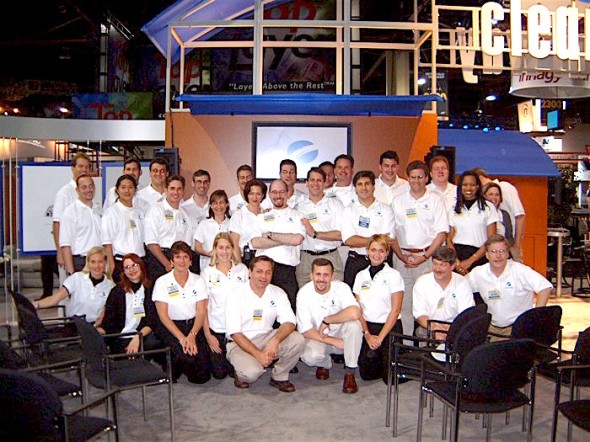 So we grew the company and ultimately we sold it to Mirror Image Internet, another CDN company with complementary technologies and assets. And while Mirror Image is still around today, it, also, is not a success story.  Mirror Image was never able to successfully monetize the union of their existing network infrastructure and Clearway’s advanced CDN technology, and so the company has never seen the growth that we hoped.  (And thus I learned the meaning of the term “reverse stock split.”)

Other people have gone on to build bigger CDNs — most notably Akamai, who has become the dominant player in the CDN market, and they’re doing fine financially.

Here’s the full text of what Web Hosting Magazine had to say about the invention of the CDN:

Akamai may think of itself as the grandfather of content-delivery network services, but let’s not forget the man who invented the idea: Clearway Technologies founder Mark Kriegsman.

Akamai’s business plan was entered into MIT’s annual $50,000 Entrepreneurship Competition in 1998, by which time Kriegsman had already received Patent #5,991,809 for his “web serving system that coordinates multiple servers to optimize file transfers.” The U.S. Patent Office abstract somewhat cryptically describes Kriegsman’s intervention as a “networked system consisting of one primary and at least one secondary server, both capable of storing static and dynamic content. In addition the primary server houses at least one look-up table, with which the system can use various criteria to search for specific data files and allocate transmission of each file between the primary and secondary servers based on these criteria.” (What can we say? It was 1997.)

So Akamai and Digital Island can sue each other all they want about patent infringements, but Mark– we know who really came first. Wink, wink  ; )

At the last “HacKidThon”, we showed a passel of kids how to make LED “throwies”. Each one is a nothing more than an LED, a coin cell battery, and a magnet so the contraption can stick to metal surfaces, walls and buildings, and hang there glowing.

This week, someone asked me if we could modify the classic design somehow so that the LEDs could be attached to lanyards, instead of magnets. We wanted it to be as cheap and easy as the rest of the “throwie” recipe.

A little brainstorming with Eleanor, and we came up with this: plastic-coated paperclips!

The paperclips actually help hold the LED leads in place; we put tape around them as usual, though that’s not shown in the picture. The plastic coating keeps the paperclip from shorting out the positive and negative battery terminals.

The coated paperclips cost less than a penny apiece, and come in colors that match the LEDs. Victory!